What is a Breast Thermography?

In the US, about 1 in 8 women will develop invasive breast cancer over their lifetime. When it comes to breast cancer, early detection is key. Once a woman reaches the age of 40 it’s important that she starts seeing her doctor for annual breast cancer screenings. While mammograms are the most common screening tool it may not be as effective for detecting breast cancer for women under the age of 50. In this case a breast thermography may be a better option. 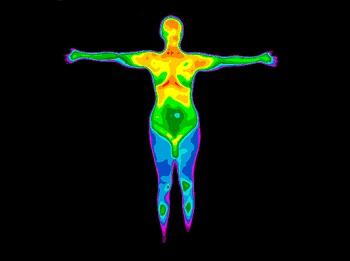 What is breast thermography?

Thermography, also known as thermal imaging, is a non-invasive test that only takes about 15 minutes. Unlike a mammogram, which presses on and squeezes the breast, a thermography does not. Of course, those who aren’t a fan of the discomfort associated with a mammogram shouldn’t assume that a thermography would be better suited to them. A mammogram is still considered the most effective breast cancer screening tool.

However, during a breast thermography, infrared imaging is used to pick up on small changes in the breast that affect its symmetry. Therefore, it will detect changes that are occurring in one breast that make it different from the other one.

Cancerous breast tissue compared to healthy breast tissue differs in blood flow and metabolic activity, two things that breast thermography can detect. A thermograph can be performed as early as 18 years old and may be a great baseline recording, particularly for women who are at an increased risk for developing breast cancer. A thermography can also be used in conjunction with annual mammograms.

What if my breast thermography detects an abnormality?

It’s important to understand that even if there is an abnormality found during your screening, your doctor will need to perform further testing to figure out what’s going on. An abnormality doesn’t necessarily mean that breast cancer has been found. These abnormalities can also be a sign of:

It’s important that you talk with your doctor to find out the next best step to reaching a diagnosis so that an effective treatment plan can be created.

If you have questions about breast thermography, or if it’s time to schedule a breast cancer screening then call your osteopath today to schedule an appointment.

This website includes materials that are protected by copyright, or other proprietary rights. Transmission or reproduction of protected items beyond that allowed by fair use, as defined in the copyright laws, requires the written permission of the copyright owners.

Find us on the map